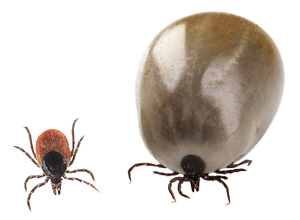 Ticks are eight-legged, brown/black spider-like creatures that feed on the blood of people and animals. Before they become engorged with blood, ticks are hardly the size of a pin head. Whenever a tick sucks blood, it slowly swells up into a brown-black or grey bulb, sometimes becoming as long as 1 cm. If a tick is sucking blood, it anchors itself into the skin and remains stuck in place there. After a few days, the tick will let go by itself. Approximately 20% of ticks in the Netherlands are infected with the bacteria that can cause Lyme disease. The infection is transmitted through the tick's saliva and takes at least 24 hours. Removing ticks as quickly as possible reduces the risk of contracting tick-related conditions. HeltiQ Tick Away lets you quickly and effectively remove ticks without even touching them.

What is Lyme disease?

Lyme disease is an illness caused by becoming infected with the Borellia burgdorferi bacteria which is transmitted through a tick bite. The transmission of these bacteria to human beings takes some time, usually between 24 and 78 hours. After a few days, the bacteria reach the body's lymph and bloodstream, enabling them to spread throughout the entire body. In about three-quarters of infected people, a red spot occurs within 2 to 4 days which spreads in time into a pale red ring about 15 cm in diameter with a light colour in the centre. Lyme disease appears in different forms and causes various kinds of complaints and symptoms. For more information about this disease, ask your doctor.

When is tick season?

Ticks can appear at any time of year but are most active between March and October. This is also the season in which most tick bites occur.
Ticks can also remain active in the winter, especially when temperatures are above 7°C. One million people are bitten by ticks in the Netherlands each year. In warmer countries, ticks can be found everywhere and are active all year long.

Where can ticks be found?

Ticks live in wooded and grassy areas, dunes and gardens, and are found in tall grass or bushes. Ticks live close to the ground, cannot jump or fly and do not fall from trees, contrary to popular belief. From the bushes or the grass, they crawl onto passers by such as animals and people, which they detect through the body heat, carbon dioxide and scents they put off. Ticks prefer to cling to warm folds in the skin, such as the armpits, crotch, backs of the knees and the intergluteal cleft. In children, they also often cling to the head, behind the hairline and behind the ears. After becoming attached, they cling firmly to the skin by sucking.

How can I prevent tick bites?

To avoid tick bites, it is best to remain on the path when walking in woody and grassy areas and avoid tall grass and bushes as much as possible. You can also protect yourself by wearing long sleeves and tucking your pant-legs into your socks. After walking outdoors, shake out your clothing to remove any ticks that may be there, and check yourself and your family specifically for ticks after walking through a woody or grassy area or playing outdoors. It is also a good idea to always have HeltiQ Tick Away on hand in your car or backpack.

How can I recognise a tick bite?

If you have a tick bite, it will look like a very small, black spot on the surface of your skin which will become larger as the tick engorges itself. Tick bites are often painless, which means you may not notice them very quickly. Like most insect bites, a red spot will form in the place where the bite is, which usually does not become larger than 1 or 2 cm in diameter and disappears within two weeks. If you have a tick bite, it is advisable to keep a close eye on the spot for at least three months. If a red or blue-red spot or ring forms around the spot, you may have contracted Lyme disease and you must see your doctor immediately.

Also see your doctor if any of the following occurs:

What is the best way to remove a tick?

If you have been bitten by a tick, you must remove it within 24 hours. The best way to do this is using HeltiQ Tick Away.
Before removing the tick, it is important that you do not use any alcohol, iodine, oil or other substances to numb the tick. Avoid handling the tick before trying to remove it and never squeeze it flat! Read here how to remove ticks using HeltiQ Tick Away.